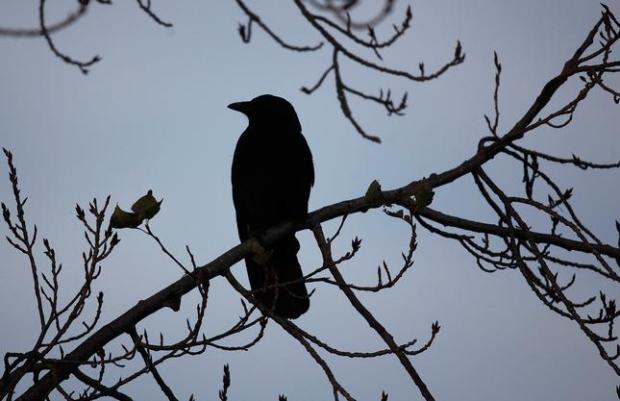 One of the more popular articles posted on this site was the article entitled, Owls In Mythology, Folklore & Superstition.  As it turns out, many of you are big fans of owls and let's face it, as birds go, they are definitely interesting.  Considering the popularity of that article, this author thought it might be worthwhile to post another article about a different bird, or in this case, birds - crows and ravens - and to discuss their role in mythology, folklore, and superstition.

Crow or Raven - What's the Difference?

Although they come from the same family (Corvus) and look quite similar, crows and ravens are two, different birds.  Crows tend to be smaller than ravens, and ravens have a decidedly more raggedy look about them.  Both birds can vocalize in a number of different ways, but ravens tend to have a deeper sounding call than crows.

Even today, crows and raven can still evoke feelings of fear and trepidation in us.  They are often an iconic figure featured in our popular culture around Halloween.  They have also been written about in classic works of literature and poetry.  Perhaps, the best-known example is The Raven, a terrifying poem by Edgar Allan Poe.  Even before Poe, Shakespeare characterized the birds as harbingers of evil and doom in Macbeth and Othello.

However, the characterization of crows and ravens in literature has not been universally grim.  In Aesop's fable, The Crow and the Pitcher, for example, the crow presents as a bird of both cunning and intelligence.  The crow finds himself in a deserted land, looking for something to drink.  He comes upon a pitcher of water, but his beak is too short to reach the water.  Knowing that if tipped over the pitcher, the water would spill out onto the ground, the crow devises a plan whereby he throws pebbles into the pitcher until the water level rises to the top, and he is able to drink.  In this way, Aesop presents the crow as an ingenious bird.

The crow has also been portrayed in modern films, such as The Crow by Alex Proyas, where the crow is featured as having magical abilities, like the ability to bring a dead soul back to life.

Even the English language gives us a clue as to the beliefs associated with crows and ravens.  Collectively, a group of ravens can be referred to as a "conspiracy" of ravens.  Groups of crows are given even more evocative descriptions, such as a "murder" of crows, a "cauldron" of crows, and a "storytelling" of crows.

What is it about these birds that brings to mind such ideas?

For thousands of years, both birds have played a significant role in the mythology, folklore, and superstitions of many cultures.  In some cultures, they were viewed as omens of ill fortune.  In others, they were revered (or feared) as messengers from the gods or a form certain gods would take on when visiting the mortal world.  Still others viewed them as tricksters of which one should be wary.  Regardless of whether these birds were viewed positively or negatively, they feature prominently in many, ancient belief systems, systems that may continue to influence us to this day.

According to the ancient Celts, for example, the warrior goddess known as The Morrigan or The Morrighan (meaning "great queen," "terror," or "phantom queen") was said to appear in the form of either a crow or a raven or was accompanied by them, usually in groups of three.  Seeing a group of three crows or ravens signified that the goddess may be watching.  The Celts believed that The Morrigan was also present when crows and ravens collected on the battlefield to feast on the flesh of fallen warriors.

In other Northern European cultures, particularly in Britain and Wales, crows and ravens were viewed as an evil portent, and they were often associated with witches and witchcraft.

By contrast, in Norse mythology, Odin, the chief god in the Norse pantheon, is often portrayed with a raven or a pair of them.  In the Eddas, a collection of Icelandic literary works from which much Norse mythology is derived, this pair of ravens are named Huginn and Muinnin.  At daybreak, Odin sends the pair into the mortal world to observe what was going on.  They would then return and whisper to Odin everything they had learned.  They were Odin's spies.  At the same time, Huginn and Muinnin symbolized Odin's mind and thoughts, and thus, they were associated with the ability to foresee the future.

The association of crows and ravens with the ability to foresee the future is common in the superstitions of both the ancient Greeks and Romans.  Both cultures considered crows and raven significant due, in part, to the fact that they practiced augury.  Augury is a method of divination (telling the future) that uses birds.  In the Greco-Roman world, soothsayers called "augers" would attempt to predict future events based on the color of birds or their flight. Crows and ravens were significant both for their ominous black feathers as well as their behavior and flight patterns.  It was believed that if a crow or raven flew in from the east or south, for example, it was an omen of good fortune.

Ravens and crows also appear often in the native cultures of North America.  In addition to being portrayed as tricksters, the birds' intelligence is often a prominent feature in their characterization.  In one Native American story, the raven is described a shape-shifter who stole a box of light held by the chief of Heaven and flew away with it.  The raven dropped the box, and light broke into many pieces, creating the stars, the moon, and the sun.  Other native cultures tell stories about the raven making the world more a more formidable place for mankind to give itself amusement.

Still, other native cultures appear to have revered, if not worshipped, ravens.  In the Alaskan tradition, for example, killing a raven was believed to bring upon a person great harm.  In the American southwest, Native American tribes who engaged in the "Ghost Dance" religion to regenerate the earth decorated themselves with crow feathers, painted crows on their clothes and sang to the crows.

Interestingly, ravens have been treated somewhat ambiguously in the Christian tradition.  In the Book of Genesis, after the flood waters receded, the raven is the first bird Noah sends out to find land.  At the same time, Genesis describes the raven is described as "unclean."  (Gen. 7:8.)  In the Book of Kings, by contrast, ravens are portrayed as kindly, feeding hermits in hard times.  (Kings 17:6.)

Ravens have also been described as teachers, referencing again the birds' intelligence.  The Hebrew Talmud, for example, says that ravens taught man how to deal with death.  Similarly, a raven teaches Adam and Eve how to bury Able after he was murdered by Cain because they had never buried a body before.

This discussion barely scratches the surface of the many portrayals of crows and ravens in mythology, folklore, and superstition.  Whether they are viewed as intelligent, cunning, evil, or divine, these birds are a prominent symbol in many belief systems throughout the world, beliefs which continue to influence our modern culture.  Perhaps, Poe left us with the most enduring vision of these birds when he concluded The Raven with: