In Search Of Queen Nefertiti 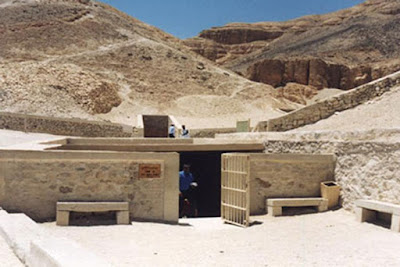 In 1922, Howard Carter discovered the entrance to the tomb of King Tutankhamen, the "boy king" of Egypt's 19th Dynasty. Tutankhamen - "Tut" for short - ruled Egypt for only 10 years.  He died in approximately 1324 BCE.  When Carter peered inside the tomb, his benefactor, Lord Carnarvon, asked, "Can you see anything?"  Howard famously replied, "Yes, wonderful things."

According to Egyptian officials, King Tut's tomb may not yet have given up all its secrets.  Based on infrared scans of the tomb, archaeologists confidently believe they have discovered a hidden chamber behind the north wall of Tut's burial chamber.  For reference, the map below shows the layout of King Tut's tomb.

As if the discovery of a secret chamber inside King Tut's tomb was not, by itself, tantalizing enough, Nicholas Reeves, a professor of archaeology at the University of Arizona, believes the hidden chamber is the final resting place of none other than Queen Nefertiti.

Nefertiti remains one of Egyptian history's most famous figures.  In life, Nefertiti was known not only for her striking beauty as shown by the well-known bust below, but also because she ruled alongside her controversial husband, the pharaoh Akhenaten, who regarded as the "Mistress of Upper and Lower Egypt." 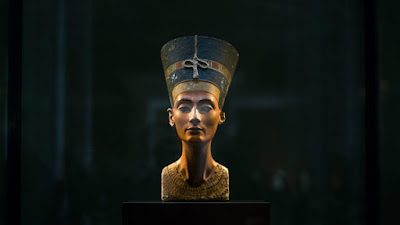 In death, Nefertiti has proven to be elusive.  Despite past claims to the contrary, her remains have never been found.  If she is discovered interred in King Tut's tomb, the find would be one of the greatest archaeological discoveries of all time.

Discovering Nefertiti inside King Tut's tomb would also raise interesting and provocative questions about the tomb itself. According to am article in the New Yorker, when Howard Carter first descended the stairs into King Tut's tomb, he did not think the tomb was very kingly, despite the fact it was filled with treasure.  For example, relative to other pharaohs' burial chambers, Tut was laid out in a small room.  Moreover, the room was oriented to the right of the tomb, not to the left as was customary at the time.  Facts such as these lead some archaeologists - including Reeves - to suspect that the tomb may, in fact, have been constructed for Nefertiti, with Tut laid to rest in it as an afterthought when the "boy king" died suddenly and unexpectedly at age 19.

"If I'm wrong, I'm wrong,"  Reeves has said of his theory.  "But, if I'm right, the prospects are frankly staggering."

Others urge caution.  They point out that, even if there is a hidden chamber inside the tomb, the chamber might house another mummy, contain more treasure, or simply be empty.

For now, Reeves' theory - far more tantalizing than an empty room - has lit up the Internet and excited Egyptophiles around the globe.  You can read more about this story at the links provided below.