Castles occupy a special place in the hearts and minds of many, particularly those interested in medieval history. In addition to being marvelous examples of period architecture, castles bring to mind images of chivalrous knights, kings riding into battle, feasts, royal intrigue, jesters, and jousting tournaments.

Residents of Treigny, France are watching this history and architecture come to life. Beginning in 1997, a team of archaeologists and some 50 laborers started building a 13th-century castle in Treigny, called Chateau de Guedelon.  But here's the catch: they are building it using only materials and techniques that would have been available to castle builders in the 13th century.  The workers even wear period clothing. 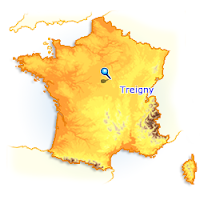 Treigny, which is located in the Burgundy region of France, was chosen as the site because of its close proximity to the materials and resources needed to build a 13th-century castle, including the availability of a nearby stone quarry, a water source, and a forest. The map to the right shows the location of Treigny:
According to the official English language website for the project, in 2016, Chateau de Guedelon will be open for tourism from the 14th of March until the 1st of November.  The castle already draws some 300,000 visitors per year, according to the UK Telegraph's online travel magazine.

You can watch this short YouTube video clip, showing just a few of the many painstaking steps involved in the project:

You can also learn more about Chateau de Guedelon from its Facebook page or Wikipedia.

Chateau de Guedelon opened for tourists in 2016.  Below are a couple of photographs from its Wikipedia page showing how the castle looked in 2016.  It has been called the largest archaeological experiment in the world, so if you are in France, check it out.