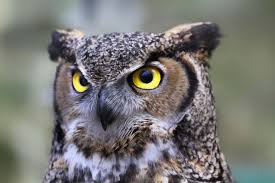 When it comes to birds, one must admit owls rank at the top of any "most fascinating" list.  Is it their wide-eyed look, giving them that all-knowing gaze?  Maybe, it is their nocturnal hunting habits, lending them a predatory reputation.  Then, of course, there is their "hoot" - a signature call among all bird species.  Without question, the owl's call has the ability to capture our imaginations while, simultaneously, sending a chill down our spines.

For whatever reason, owls have a certain air of mystery about them.  Consequently, throughout history, owls have been the subject of many beliefs.  Sometimes, these beliefs venerate the bird; others deride them.  This article looks at the different ways in which owls have been characterized in Classical mythology, folklore, and superstition.


According to Greek mythology, Athena favored the owl above all other birds, particularly the Little Owl (Athene noctuna) which inhabited the Acropolis.  For the ancient Greeks, the owl represented a protector, especially for Greek armies.  It was believed that, if an owl flew over an ancient Greek army during battle, the army would be victorious.  The Greeks depicted owls on coins and many other items, as shown here.


Although the Romans borrowed much of their culture from the Greeks, they did not embrace owls.  Sometimes the owl is depicted alongside Minerva; however, owls were generally seen as an omen of bad luck.  Romans believed witches transformed themselves into owls in order to suck the blood of babies.  To dream of an owl meant especially bad luck for travelers.  Finally, unlike the Athenians who protected the owls of the Acropolis, Romans believed that, if you nailed a dead owl to your front door, you would avert the birds' evil.

Owls In Other Legends & Folklore


The Greeks and Roman were not the only cultures to form beliefs about owls.  Owls occupy places of both reverence and revulsion across the world.  In English folklore, for example, owls - being a night bird - epitomized death and evil.  Similar to the Romans' belief, English folklore dictated that nailing a dead owl to the door of a barn warded off evil.  English poets wrote about the owl as the "bird of doom."

According to Indian mythology, however, the barn owl is associated with the Hindu goddess of wisdom, Lakshmi.  By associating the owl with wisdom, Indian mythology bears some similarity to that of ancient Greece.  In certain parts of India, however, owls were not always revered quite the way they were in ancient Greece.  In southern India, for example, the hoots of an owl could spell good fortune or ill, depending on the number of times the bird cried.

On the African continent, the owl is frequently associated with wizards or sorcerers, as seen in the Bantu and Zulu cultures.  As such, the bird has a generally bad reputation.  In Morocco, the cry of an owl is especially potent, capable of killing an infant.  Similarly, the Swahili believe that an owl can bring illness to children.

In Indonesia, the owl is thought to be very wise.  Similarly, to the Aborigines of Australia, consider the owl sacred because it is believed the souls of women become owls (men become bats, incidentally).

In the ancient cultures of the Americas, not surprisingly, one finds differing beliefs about the owl.  For the Aztecs, the owl was associated with an evil god.  However, the Incas venerated the owl.  For most Native American cultures, however, the owl symbolized death; hearing one's hoot was considered an unlucky omen.  You can learn more about many Native American legends related to owls here.


Much of the mythology, folklore and superstition surrounding owls continues to influence the way these marvelous birds are depicted in modern pop culture.  Like the ancient Greeks, we associate owls with wisdom.  Many remember the wise - if not somewhat cunning - "Mr. Owl" from the vintage Tootsie Pop commercial.  For those of unfamiliar with the commercial, check it out below to see how "Mr. Owl" is referred to as the "wisest" of all the animals.

Most recently, we have seen owls appear in pop culture through the "Harry Potter" series.  In the stories, owls accompany many of the student witches and wizards attending Hogwart's.  In fact, Harry Potter, the main character, has a pet owl named "Hedwig."  Hedwig was played by the Snowy Owl (Bubo scandiacus), pictured right.

Depicting owls as the associates - and protectors - of witches and wizards reveals a modern-day link to the beliefs of many ancient cultures.  You can read more about the owls of "Harry Potter" here.

If you are interested in the myths, folklore and superstitions about owls, you will find a wealth of information about these birds at Owl Pages.  It is a must-read site for anyone keen on learning all there is to know about owls.  For those of you interested in owls in popular culture, check out this site here.