Today, June 21, marks the summer solstice.  Like the vernal and autumnal equinoxes and the winter solstice, the summer solstice (also known as the June solstice) is steeped in ancient traditions, customs and beliefs.  Many of these continue to be observed in modern society, particularly (but not exclusively) among neo-pagan or Wiccan societies.

One tradition pertaining to the summer solstice involves Stonehenge.  It is believed that Stonehenge, the most famous megalithic structure in the world, was built around 3100 BCE, and that it may have been built, in part, to mark the summer solstice.  When viewed from the center of the stone circle, the sun appears to rise on a particular point in the horizon.  Neolithic builders of Stonehenge may have considered this point to mark the beginning of the new year, although this is far from certain.  Regardless, today, thousands of people flocked to Stonehenge to watch the sun rise over this point on the horizon, continuing this important tradition. 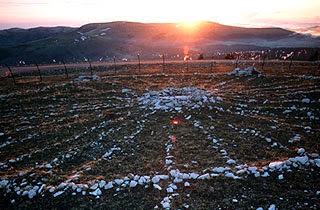 Similarly, in North America, many Native American cultures observed the summer solstice as a time for celebrating the sun.  For example, as one article notes, many scholars believe that the arrangement of stones atop Wyoming's Big Horn Mountains (9,642 feet), known as the "medicine wheel," was built as a tribute to the summer solstice.

The "medicine wheel" is pictured to the right.  Between 70 and 150 such wheels have been identified in South Dakota, Wyoming, Montana, Alberta, and Saskatchewan, and scholars believe that they are interrelated structures.

Another Native American ceremony associated with the summer solstice is known as the "sun dance."  Legend has it the "sun dance," a ceremony marking death and rebirth, began among the Lakota Sioux; however, variations of the ceremony were practiced by many tribes including the Arapaho, Arikara, Asbinboine, Cheyenne, Crow, Gros, Ventre, Hidutsa, Plains Cree, Plains Ojibway, Sarasi, Omaha, Ponca, Ute, Shoshone, Kiowa, and Blackfoot tribes.