12 Mythical Creatures That Turned Out To Be Real

Mythology is replete with fantastic creatures of every imaginable kind.  However, some of these "imaginary" creatures actually turned out to be real.  Here is a list of the top 12: 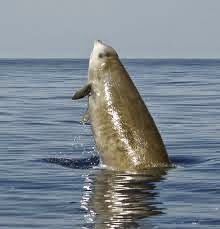 Not surprisingly, many of our myths and legends involving animals come to us from the tall tales told by sailors returning from far flung voyages.  This first entrant is an example.  The ziphius is a creature that, in Medieval folklore, was also known as the "water owl."  "Ziphius" is a Latin word, meaning "sword-like."

According to legend, ziphius had the body of a fish, the head of an owl, and a beak that could pierce the hulls of ships.  Today, the inspiration for this creature is Cuvier's Beaked Whale.  Capable of growing to 20 feet in length, Cuvier's Beaked Whale belongs to the genus ziphius.  It is one of 20 species of beaked whales.

Despite its legendary reputation, according to Wikipedia, Cuvier's Beaked Whale actually avoids ships.  It also prefers depths of more than 1,000 meters (or 3,300 feet), and can dive an astonishing 1.8 miles below the water's surface.  Nevertheless, it is the most frequently spotted beaked whale. 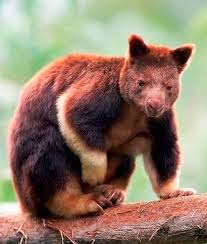 According to the legends of the Moni people of Western Indonesia, the bondegezou, meaning "man of the forest" is a creature resembling a human, usually covered in black and white fur.  Like humans, legend had it the creature could stand on two legs.

In the 1980's, a photograph of the Bondegezou was sent to an Australian research scientist who initially, and mistakenly, identified it as a young tree kangaroo.  It was not until 1994 that the same scientist conducted survey of the area where the photograph was taken, determining the animal was an entirely new and different species of marsupial that spends most of its time on the ground and is capable of standing on two legs.

Unlike ziphius, spotting a bondegezou is a rare occurrence.  None exist in captivity. 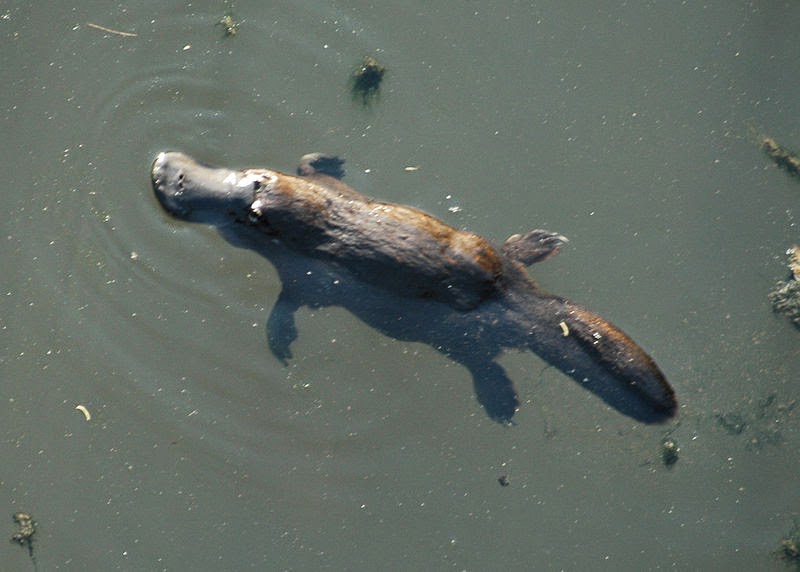 In 1798, animal expert, George Shaw, received what he believed was the carcass of a beaver with a duck's bill and spurs on its legs.  Believing the carcass to be an elaborate hoax, Shaw cut it into pieces, trying to discover stitching.

Today, we know this creature as the platypus, a creature native to Australia.  Its name is often preceded with the phrase "duck-billed," referring to one of its most unique characteristics.  In addition, the spurs on its legs are capable of producing a powerful poison, lending credence to legend which referred to the platypus as being venomous. 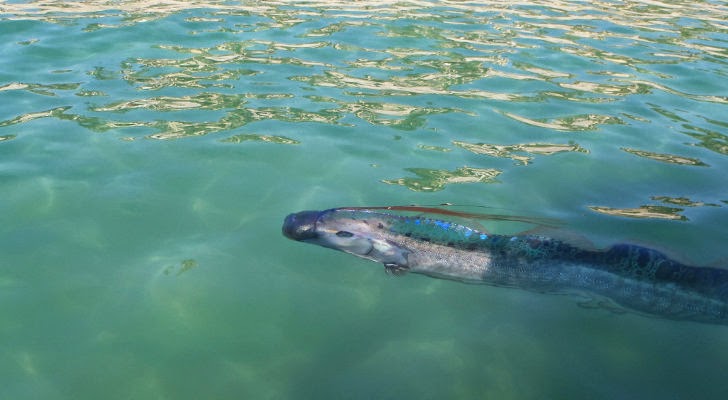 One of the most captivating stories involving sea creatures involve legendary sea serpents.  For centuries, sailors have been recounting tales of these fearsome and allegedly ferocious creatures, claiming they attacked ships.  Recorded sightings number over one thousand.

Today, it is believed that these sightings can be attributed primarily to an animal known as an oarfish. Capable of growing to an astonishing 50 feet in length and bearing a mane-like crest, the oarfish, like ziphius, has an ill-deserved reputation.  Docile by nature, the oarfish avoids contact with humans and does not attack ships. 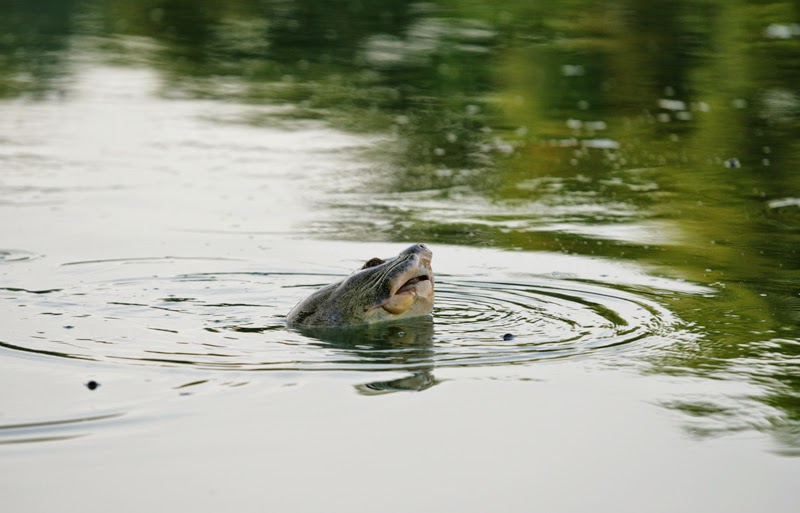 Like the stories told about sea serpents, sailors have also been spinning yarns about giant turtles for hundreds of years.  Moreover, stories of giant turtles that hold the world on their back figure prominently in the mythology and spirituality of many cultures. Versions of this myth can be traced to India, China and North America.

Until recently, scientists considered giant turtles to be "cryptozoological."  Cryptozoology is the study of animals whose existence is disputed or unsubstantiated, like the loch ness monster or yetis. However, in 1998, a six-foot long turtle was caught on film in a lake in Vietnam known as Hoan Kiem Lake. Interestingly, this same lake is the site of a Vietnamese legend about a giant turtle that dates to the 15th century.  Surprisingly, the turtle had gone undetected by scientists despite the relatively small size and shallow depth of the lake. 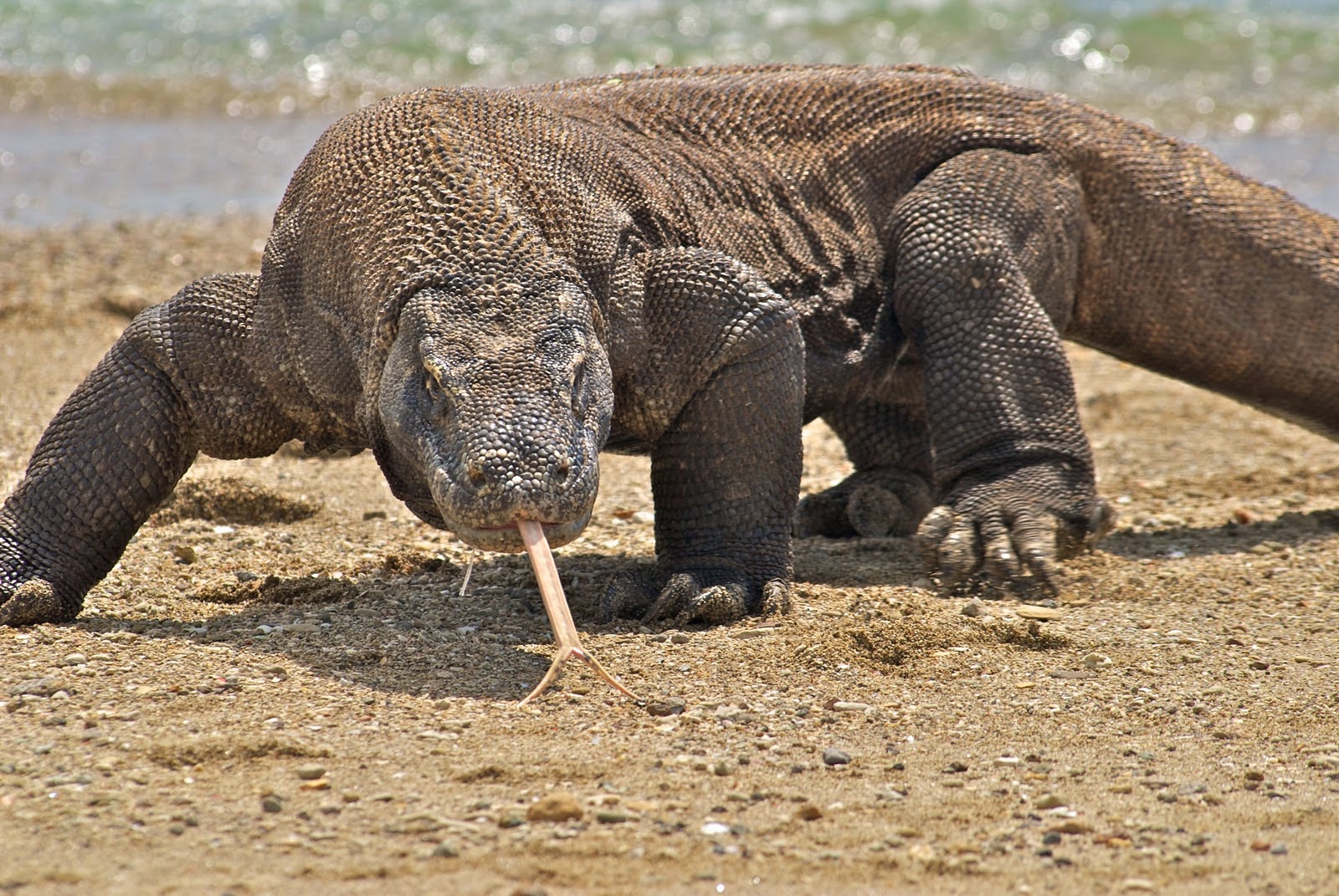 By the early 20th century, science relegated giant lizards to prehistory.  Even when pearl fishermen returned from Indonesia with tales of giant lizards - and an expedition to the area produced a report of them - skepticism or lack of interest remained.

In 1926, however, an American expedition to Indonesia returned with 12 preserved specimens and 2 live giant lizards.  Named the Komodo Dragon after one of the Indonesian islands where the animals are found, this giant species of monitor lizard can grow to an impressive 10 feet in length.  According to Wikipedia, their bite also can deliver a type of anti-coagulant, leading some to refer to the Komodo dragon as having a venomous bite. 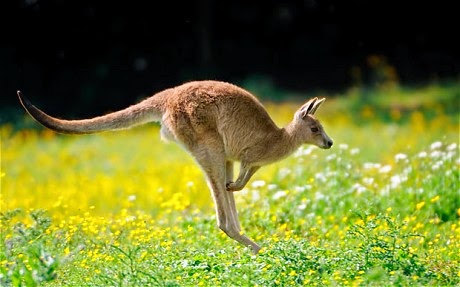 When western explorers first visited Australia, they wrote stories of bizarre and wondrous creatures of many kinds.  One such story told of a creature with the head of deer that stood upright and hopped like a frog. These tales also claimed that the creature could sprout two heads, one on its shoulders and the other protruding from its stomach.

In the 1770s, a dead specimen of what would come to be known as the kangaroo was displayed in England.  Not related to deer at all, kangaroos are a species of marsupial well-known for their jumping ability.  We also now know that they don't sprout two heads.  Rather, they carry their young in pouches on their stomachs, accounting for this part of the legend. 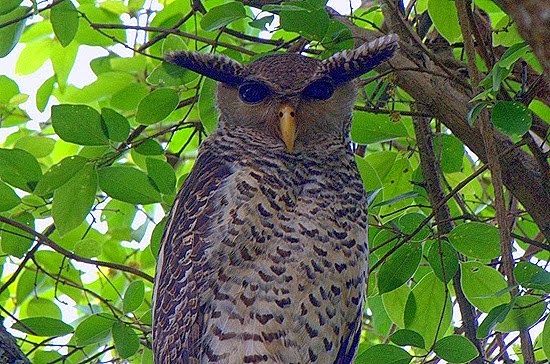 Sir Lankan folklore tells of a fearsome, horned bird known as "the devil bird."  According to legend, the devil bird has a terrifying scream, resembling a wailing woman, which portends death.  Western science dismissed the creature's existence as nothing but mere superstition because its nocturnal cries were the only evidence of its existence.

In 2001, however, the devil bird was recognized as a new species of owl, the spot-bellied eagle owl.

Ancient Egyptians depicted a strange creature, which Europeans nicknamed "the African unicorn."  A British governor of Uganda obtained pieces of striped skin and a skull of supposedly mythical creature in 1901. This led to the eventual capture of a live specimen, which is now referred to as the okapi.

The okapi is the only living relative of the giraffe, sharing its characteristic body structure and long tongue. However, the markings on its back legs more closely resemble zebra stripes. 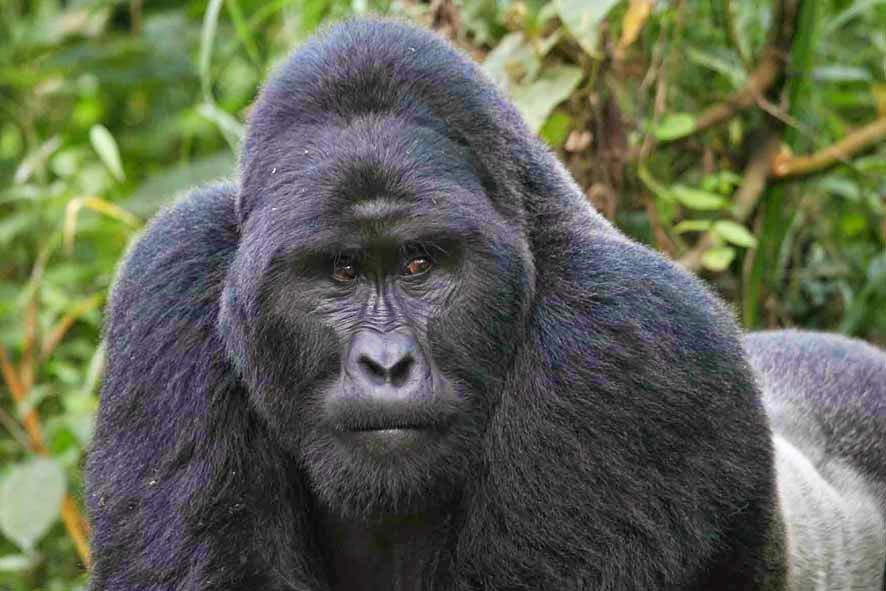 For centuries, East African tribes have told stories of the "ape men," large, hairy creatures that were capable of kidnapping and killing humans.  Similarly, European explorers recounted tales of huge, man-like apes and violent forest monsters.  Nevertheless, the existence of such creatures was regarded as a figment of the imagination.

In 1902, however, a German officer shot a "man ape" in Rwanda, and brought it back to Europe for display and study.  This introduced the world to a never-before-recognized species of ape - the mountain gorilla.  Despite legends to the contrary, mountain gorillas are docile and prefer that their activities go unseen. Threatened with extinction, no more than 400 live specimens remain in the world today.

Among the theories of Charles Darwin that received the most ridicule was his theory that fish evolved limbs and walked out of the water to live on the land.  According to Darwin, this evolutionary event took place approximately 65 million years ago.  To Darwin's critics, this was particularly problematic because it was impossible to prove.

In 1938, however, off the coast of East Africa, a peculiar fish was discovered - one with limbs.  It was further determined that the fish had no evolved for 65 million years, proving that Darwin was correct.

Perhaps more than any other creature on this list, giant squid have been the stuff of legend.  Since ancient times, mariners and scholars alike have described these allegedly ferocious behemoths.  Aristotle and Pliny the Elder both mention them.  Most commonly called the "kraken, giant squid have been featured in a number of literary works.  In Herman Melville's 1851 novel Moby Dick, for example, the crew of the Pequod encounter a "great live squid," which the narrator refers to as "the great Kraken."  The kraken was also featured in Jules Verne's 1870 novel Twenty-Thousand Leagues Under the Sea.

More recently, the kraken has been portrayed (often inaccurately) in several films, including the 1981 film Clash of the Titans, a 2010 version of the same film, The Lord of the Rings:  Fellowship of the Ring in 2001, and Pirates of the Caribbean:  Dead Man's Chest in 2006.

In the 1870s, however, several, complete carcasses of giant squid washed ashore on the beaches of Labrador and Newfoundland.  When this occurred, all skepticism about these creatures' existence ceased.

The biology of these creatures is of great interest to scientists for a number of reasons.  For example, giant squid have the largest eyes of any creature in the world, allowing them to see at depths where the light is too dim for most other animals. Unfortunately, giant squid prefer to live at great depths under the sea.  As a result, virtually all efforts to document them in their natural habitat have failed.

In 2004, however, a group of whale watching scientists were able to take 500 photographs of a living giant squid that surfaced.  The same group obtained the first video evidence of giant squid in 2006.  You can watch the video here, and it is definitely well worth seeing.

We hope you enjoyed this article.  If you know of any other creatures that should have made the list, let us know in the comments.