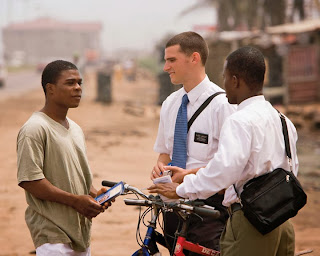 Prior to 1978, the Church of Jesus Christ of Latter-Day Saints (LDS), known also as the Mormons, prohibited African Americans from holding the priesthood.  African Americans were also blocked from participating in certain other religious activities.

These prohibitions were based on Mormon theology which stated that black skin was a sign of divine disfavor or curse, or that it reflected transgressions in a past existence.  This same theology condemned interracial marriages as a sin, and in general viewed African Americans as inferior.

On December 10, 2013, however, the LDS issued an official statement, entitled "Race and the Priesthood," repudiating this racist doctrine.  The statement concludes that "church leaders unequivocally condemn all racism, past and present, in any form."  While the statement does not include an official apology for the LDS' previous stance, the statement remains a groundbreaking and welcome departure from the church's past.

You can read more about this development at the Related Links below.