Have The Hanging Gardens Of Babylon Been Discovered? 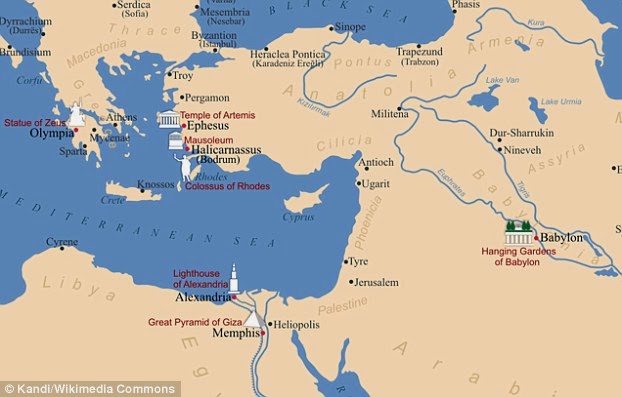 Recently, Myth Beliefs featured an article on the Seven Wonders of the Ancient World (see map above).  This article follows up on that one, focusing on the most intriguing and elusive of the Seven Wonders -- the Hanging Gardens of Babylon.

According to ancient historians, Babylon was a remarkable city.  Herodotus, in particular, remarked on the city's defensive outer walls, which he wrote were 56 miles long, 80 feet thick, and 320 feet high.  Wide enough, he said, to allow two, four-horse chariots to pass each other.  Inside the outer walls were smaller, inner walls - no less strong than the outer walls - protecting temples and immense statues of gold and other precious materials.

Babylon's walls had been rebuilt and reinforced by its most famous king, Nebuchadnezzar II (605-562 B.C.E.), who oversaw many monumental building and engineering projects.  During his reign, Babylon became the most magnificent city in the region, if not the entire ancient world.

In addition to the work he completed on the city's walls, Nebuchadnezzar also constructed the famous Ishtar Gate.  Named for one of Babylon's chief goddesses, the Ishtar Gate gleamed with blue tiles, and featured lines of animals of various colors shown in a royal procession.  The Ishtar Gate opened onto the Sacred Way, an impressive avenue that led to the city's chief structure - the ziggurat - a seven-stepped mountain of a building.

The Hanging Gardens - Myth or Reality?

According to ancient accounts, near the main ziggurat, one would find the royal palace and the famous Hanging Gardens.  Legend has it that the Hanging Gardens were built for Nebuchadnezzar's queen, Amyitis.  Amyitis hailed from Media, a lush, mountainous region that stood in stark contrast to the hot, dusty plains of Babylon.  Because Amyitis was homesick for her native landscape, Nebuchadnezzar ordered the construction of the Hanging Gardens to please her.

But, did the Hanging Gardens actually exist in the first place?  Between 1899 and 1917, German archaeologist Robert Koldewey unearthed ruins similar to what one ancient historian had described.  At the bottom of the ruins were three strange holes that may have been part of a water pump system.  Unfortunately, other than Koldewey's find, archaeologists have not been able to uncover conclusive proof that such a massive garden structure ever existed.

Recently, Oxford Babylon scholar, Dr. Stephanie Dalley, has claimed the reason archaeologists have not discovered the Hanging Gardens of Babylon is because they were never in Babylon to begin with.  According to Dalley, who has spent 20 years studying the Hanging Gardens, their precise location is in Ninevah, near Mosul, some 350 miles away in modern day Northern Iraq (see map below).  Ninevah was known as New Babylon. 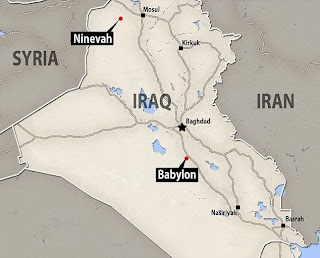 
You can read more about the Hanging Gardens in these fine articles from DailyMailOnline and UnexplainedMysteries.com, as well as by reading any of the Related Links below.