What's In A Name? The Story Of Rumplestiltskin

For those of you following our '7 Tales in 7 Days' series, you may be wondering what has happened to the daily postings.  To put it simply - and I hope you can all sympathize - I fell victim to the first bit of the flu bug earlier in the week.  I hope it's the only one this year, as I have not felt up to doing much of anything until today, including blogging.  So, now it's catch up time!

To catch us up, I am posting two tales tonight.  The first helps to answer the question posed in the article's title - what's in a name?  As it turns out, knowing what to call a supernatural being can be terribly important.

Tell Me My Name:  The Story Of Rumplestiltskin 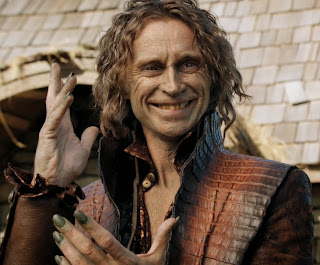 Because of the popularity of ABC's Once Upon A Time - thanks in no small part to the brilliant portrayal by actor Robert Carlyle - the character of Rumplestiltskin (pictured left) is more well-known than ever before.

In the original story, collected by the Brothers Grimm in 1812 from a much older German folk tale, we find a lowly miller has lied to the king.  He falsely tells the king that his daughter has an amazing ability - she can spin straw into gold.  Overcome by avarice, the king imprisons the miller's daughter in his castle, demanding that she make good on her father's boast or suffer execution.  Specifically, the king threatens to cut off her head.
Just when the miller's daughter sees no way out of her predicament, along comes an imp-like character to save the day, or so it seems.  As Carlyle's Rumplestiltkin is fond of reminding characters, "All magic comes at a price," so it was with the original Rumplestiltskin.

Magically, he spins the straw in the room into gold in exchange for the daughter's necklace. Naturally, she is elated, but unfortunately, so is the king.  Taking the hapless girl to a larger room filled with straw, the king demands that she spin an even larger quantity of straw into gold.

That night, the imp returns again, spinning the larger quantity of straw into gold.  This time, he does so in exchange for the daughter's ring.

On the third day, the king takes the miller's daughter to a still larger room, telling her that if she can repeat the task and fill this room with gold, he will marry her.  If not, he will kill her.

When the imp returns on the third night, however, the miller's daughter has nothing of value with which to pay him for his magic.  The imp persuades the daughter to promise her first-born child to the imp, and thus, spins the straw into gold.

Happy beyond measure, the king weds the girl, and in time, she is ready to bear her first child.  Suddenly, the imp returns, demanding the child as promised.  The miller's daughter - now a queen - offers the imp untold riches, but he has no use for them.  Finally, through some back and forth, the imp agrees to forego taking the child if the queen can simply guess his name.

Through a series of events - you will have to read the Brothers Grimm to find out precisely how - the queen learns the imp's name is Rumplestiltskin.   When she tells the imp his name, he becomes so enraged that he splits himself in two.

The Significance Of Knowing A Name

As it has been alluded to in Once Upon A Time, Rumplestiltskin gets his power by learning the name of the "Dark One."  Before that, he is nothing more than a lowly, ostracized peasant.  Armed with this new-found knowledge, however, he is able to rob the former "Dark One" of his magic, taking it for his own.

Similarly, in the original story, we have the queen escaping a horrible contract with Rumplestiltskin by learning the imp's name.  This begs the question:  what's the significance of knowing a thing's name?

It has long been believed, both in Biblical and occult circles, that knowing the "true  name" of a being - whether it be a malevolent being such as a demon or a diving being such as a god or goddess - gave a person power over that being.  A true name is the name of the being that, spoken in a particular sacred language, is closely associated with that being's true nature or abilities.

Ancient Jewish beliefs, for example, considered the 'true name' of God to be so potent that uttering it was strictly taboo.  This ancient tradition can also be seen, arguably, in the story of Moses encountering the burning bush.  When Moses asks the bush (a fiery representation of God) to tell him its name so that he can tell the "children of Israel" in bondage in Egypt, God responds, "I AM THAT I AM."  (Ex. 3:14, King James version; Emphasis in original).