The Story Of Arachne: Why Spiders Spin Webs 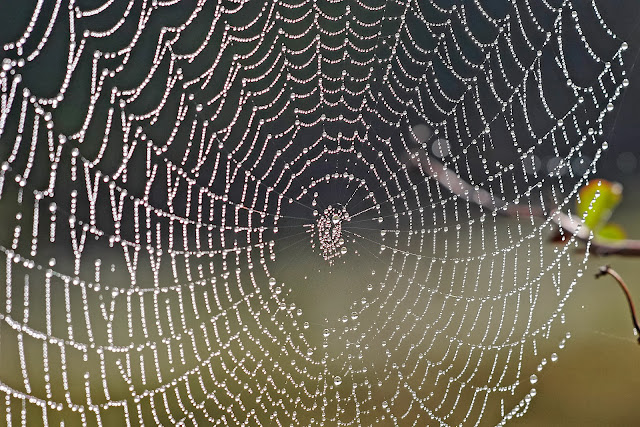 Recently, I posted a book review honoring the 61st anniversary of the publishing of Charlotte's Web.  For your convenience, you can read my article by following this link.

When Wilbur, the pig in Charlotte's Web, first meets his new-found, 8-legged friend, Charlotte, an interesting dialogue occurs.  After demonstrating her expert, fly-killing skills to a horrified Wilbur, Charlotte remarks:


"I am not entirely happy about my diet of flies and bugs, but it's the way I'm made..." [Charlotte says]..."I just naturally build a web and trap flies and other insects...I can't help it.  I don't know how the first spider in the early days of the world happened to think up this fancy idea of spinning a web, but she did, and it was clever of her, too." [Emphasis added.]

[S]aid Charlotte, shaking one of her legs, "Do you realize that if I didn't catch bugs and eat them, bugs would increase and multiply and get so numerous that they'd destroy the earth, wipe out everything?"

Why Do Spiders Spin Webs?

This dialogue whetted my appetite for writing the next installment in our series focusing on female characters portrayed in mythology and folklore stories.  And, so, the question remains:  Just why do spiders spin webs?  For one possible answer, we can look to the myth of the ill-fated Arachne.

Like Medusa, the subject of our first installment, Arachne incurred the wrath of Athena, According to Encyclopedia Mythica, Arachne was a young girl - possibly a princess - from Lydia.  Lydia was an Iron Age kingdom in what is now present-day Turkey.

According to the myth, Arachne possessed such great skill at weaving that she was thought to possess some form of magic.  It was said that nymphs would stop to watch Arachne weave, so captivating it was merely to watch the young girl working at her loom.

When the people proclaimed that Arachne must have been instructed by Athena herself - the goddess of wisdom, strategy and weaving - Arachne scoffed arrogantly.  Athena was no match for her own skills, she proclaimed.  Arachne categorically refused to acknowledge that her skills had anything to do with the goddess.

Although angered by Arachne's boastfulness, Athena sought to give Arachne a chance to repent.  Disguised as an old woman, Athena visited Arachne, warning her not offend the gods.  Rather than repent, Arachne went even further, daring Athena to challenge her loom against loom.

Being a goddess, Athena did not shrink from Arachne's challenge.  She transformed herself into her immortal form, and the two began weaving intricate tapestries.  Athena wove four scenes depicting humans who had been punished for equating themselves with the gods.  By contrast, Arachne wove blasphemous tapestries depicting Zeus' sexual infidelities.

Although Athena admitted Arachne's weaving was flawless, the young girl's choice of subjects was the final straw for the goddess.  Athena tore Arachne's tapestry to pieces and destroyed her loom.

Then, according to the myth, she touched the girl on the forehead so that she would know and feel the full guilt of her arrogance and disrespect.  Arachne was so ashamed, she committed suicide.

In what some describe as a show of pity, Athena raised Arachne from the dead.  However, in what others describe as a curse, instead of bringing her back to life in human form, Athena transformed her into the first spider whose descendants from that time have all woven webs of amazing strength, variation and complexity.

Do you think Athena intended to show pity or curse Arachne for her boastfulness and pride?  If you believe Athena cursed Arachne, how does Arachne's fate compare to that of Medusa.  Does it seem like Arachne got off light?  If so, why do you think she was spared Medusa's gruesome fate?  If it seems like Arachne suffered a relatively equal punishment, why do you think so?

We love comments!  Feel free to comment on these points, or any others, pertaining to women in mythology and folklore.  And, don't forget, we are always looking for guest contributors, too!