Last week, I posted a pictorial display entitled 10 Beautiful Castles of Europe. You will find a link at the end of this article, under "Related Articles."  In keeping with this theme, and the Through the Modern Lens features for Monday postings, I thought I would post 5 of the most beautiful and/or interesting castles or fortifications in Asia or the Middle East.

Castles in Asia, you say? You bet!  In fact, some of the most stunning and alluring examples of castle architecture are found outside of Europe.

Seen here in wintertime, Himeji Castle is a magnificent, fortified structure typifying the strength and uniqueness of Asian castle-building.  It is located in Japan, and dates to 1333.  Japan has some 100 fine castles, in fact, and a complete list of these can be found here.

2) The Great Wall Of China

Now, I imagine some of you might question entering a wall - however spectacular - in an article about castles.  However, the Great Wall of China was actually constructed as a series of fortified min-castles, if you will, connected by a wall.  So, I believe it would be a mistake not to include it.

This is one of the best preserved of any of the Crusader fortifications.  It is also one of the earliest known castles to make use of concentric defensive positions that could each operate independently, as needed.  It is located in Syria.

What makes Asian castle and fortification structures so interesting is the sheer diversity in style and approach.  In Cambodia, for example, we find the Angkor Wat Complex, abandoned in 1432.  Part temple, part fortress, part cultural center, it served many purposes, not just defensive ones. 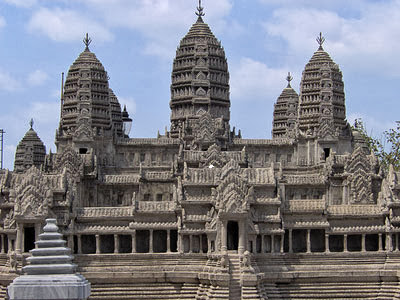 Turkey is an eastern nation second only to Japan, perhaps, in its impressive list of castles and fortified structures.  In Anamur Province, Mamure Castle, still stands.  Original construction on the site dates back to the Romans, but it now reflects its Crusader, medieval character in well-preserved form.