When you look at folklore from just about any culture, from any time period, one fact cannot be ignored: Humankind is - and always has been - mesmerized by the Moon.

Often referred to as "lunar folklore," tales about the mystical powers of the Moon over our moods, love lives, the behaviors of animals, and even natural elements (particularly water) is legendary.  Many cultures, of course, deified the Moon and still do, giving it significance unrivaled by any heavenly body except the Sun.


At the same time, the Moon is closely associated with certain creatures from folklore, particularly werewolves and, to a lesser degree, vampires.  Fascination, adoration, and, sometimes, our darkest fears cloud lunar folklore like no other category. Scientifically speaking, does it come as such a surprise that the gaze of our earliest ancestors would be drawn upwards to the cold beauty of a full Moon?  Not really.

Comparatively speaking, the Earth has quite a large Moon.
In addition, we also have only one.  Unlike Saturn, for example, which has many fascinating moons, our Moon takes center stage in our night sky.  It competes with nothing else.

Moreover, predictable changes in the gravitational forces of the Moon and the Sun give our oceans their tides, affect weather patterns, and allow the Earth to have relatively predictable seasons.  For more discussion of this important topic, you may consult a marine biology article here.  Over millions of years, this has permitted life to flourish on Earth where, insofar as we know today, it did not flourish on neighboring planets. 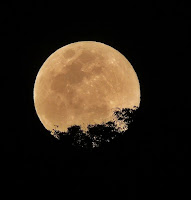 The importance of the Moon in our culture is illustrated by the many photographs taken of the Moon, both by professional photographers, scientific organizations and amateurs such as myself.  The photo to the left, for example, was taken by me near my home in California a few years ago, depicting quite a stellar lunar display one autumn night in suburbia.