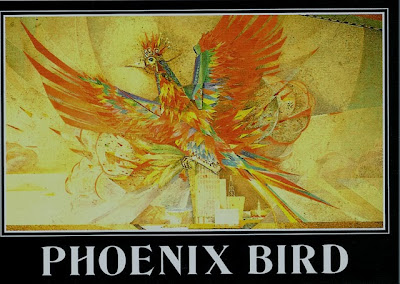 Due in part to its appearance in the popular Harry Potter movies as "Fawkes," companion animal to Albus Dumbledore, the phoenix remains one of the most well-known creatures in all mythology.

According to the Greeks and Romans, the phoenix was a bird with colorful plumage and a tail of gold and scarlet or sometimes blue and purple. Though mythological accounts of the bird's powers and abilities differ to some extent, its enduring qualities are its immortality (its ability to rise from its ashes after being consumed by fire) and that its tears possessed healing powers.

In addition to Greek and Roman myths, the phoenix was identified by the Egyptians as a stork or heron-like bird called a benu. The benu was closely associated with the rising sun and the Egyptian sun-god Ra.

The phoenix is the central figure in Lebanese ancient and modern cultures, as Lebanese are descendants of the Phoenicians and often claim themselves sons of the Phoenix. Lebanon, and Beirut particularly, is often depicted symbolically as a phoenix bird having been destroyed and rebuilt 7 times during its long history.

In China, Fenghuang ("鳳凰") is a mythical bird superficially similar to the phoenix. Second only to the dragon among legendary creatures, the phoenix is considered the leader of birds in Chinese mythology. In Japan, the phoenix is called hō-ō(kanji:"鳳凰") or fushichō (不死鳥?), literally the "Immortal Bird".

And even in Russian folklore, the phoenix appears as the Zhar-Ptitsa (Жар-Птица), or "firebird," the subject of the famous 1910 ballet score by Igor Stravinsky and a famous line of automobiles made by Pontiac Motors.

In the "Harry Potter" films, the character "Fawkes" shows off many of the mythological beliefs about the phoenix. For example, after aiding Harry in his battle with the basilisk in Harry Potter and the Chamber of Secrets, Fawkes' tears save Harry from a wound caused by the basilisk's fang, demonstrating the belief that the tears of a phoenix possessed healing properties.